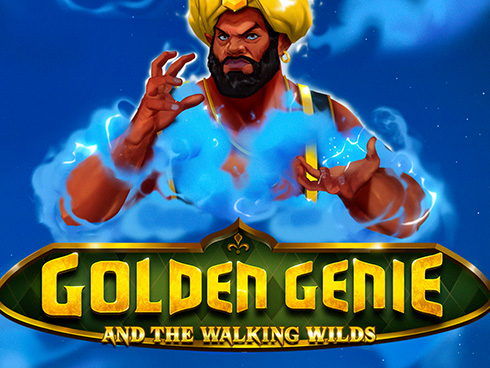 Golden Genie and the Walking Wilds DX1 slot is well put together. The colourful visuals are bright, bold are lovely and clear against the dark backdrop. The main Genie Parade feature offers plenty of potential, especially if you land a couple of new wilds during your free spins which can really get the multiplier motoring with results to match. Spin on Playlive Casino.

How To Golden Genie & The Walking Wilds DX1

There’s a simple but classy feel to the design in the Golden Genie and the Walking Wilds DX1 slot.  On the reels you’ll see A to 10 royals alongside a leopard, a panther, a lamp, Aladdin and a woman. This mystery woman is the top standard symbol, awarding 1, 3.75 or 25 times your total stake if you land 3, 4 or 5 on a payline. The genie is the wild and scatter. It therefore substitutes for all symbols to create winning combinations. The genie symbol also offers payouts of up to 25x your total stake per payline. The Golden Genie and the Walking Wilds DX1 slot has 5 reels, 3 rows and 20 fixed paylines. A winning combination pays from left to right starting from reel 1 where you need 3, 4 or 5 matching symbols. The Golden Genie slot is available to play at stake levels that start at 0.20, rising to a maximum of 100 per spin. The Golden Genie and the Walking Wilds DX1 RTP is 94.11%. The max win is 9,583 x your total stake.

Wilds are the key to success in the Golden Genie and the Walking Wilds DX1 slot. They’re central to all 3 features which deliver a selection of morphing wilds with multipliers, expanding wilds and of course, the wandering wilds with expanding multipliers. There’s also the option to buy the main Genie Parade feature. The Genie Wishes feature is triggered if you land an Aladdin symbol to the left of a lamp symbol on any base game spin. The 2 symbols will both then act as wilds. They also come with a random multiplier attached which boosts payouts by 2x, 3x, 4x, 5x or 10x. The Genie Lamps feature can become active on any base game spin. Both reels 2 and 4 will be filled with wilds. A payout consideration follows. This feature uses a win both ways mechanism so winning combinations can start from reel 5 as well as reel 1.The main bonus round is the Genie Parade feature which is triggered by landing 3 or more wild scatter genie symbols anywhere on the reels on the same spin. If you land a new wild genie during the feature, the same process follows. It shifts 1 reel to the left with each shift also increasing a multiplier by 1x. It’s possible to land the Genie Wishes feature during the free spins meaning multipliers up to 10x on certain symbols. The free spins ends when all the Genies have disappeared from the reels.

The relatively simple design and straightforward gameplay make the Golden Genie and the Walking Wilds slot a very playable one. It works very well on a mobile or tablet device. This version gives you another feature, DX1. Spin on Playlive Casino.
My rating