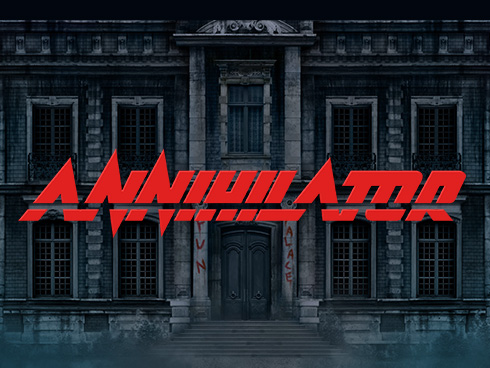 If you are a big fan of hard metal or rock music, there's a high chance you will love this game. This slot was inspired by the classic rock band, Annihilator. With this game, you are going to enjoy countless Annihilator hit tracks, which makes it more fun. To further prove that inspiration was drawn from this band, Play 'n Go also named some of the features in the game after some of their latest hit tracks. You will find exciting features like Fun Place, Set the World on Fire and many more. Gladly, this slot is featured on Playlive

Like you would expect from a rock-themed slot, this online slot explored more with dark themes, giving the game some gothic appeal. The soundtrack also puts you on your toes as you spin the reels. Interestingly, you can easily change the soundtrack by clicking the "playlist" icon adjacent to the spin icon to your preferred track in the selection. By clicking the spin icon, you are steering the reels to possible winning outcomes. However, before you go that far, you are expected to specify your bet amount. To do that, simply click the Menu icon by the bottom right, which takes you to a screen where you can set your bet amount by swiping to your preferred bet amount. On the screen, the minimum bet amount allowed is 0.10 and the maximum is 100. If you are interested in running multiple spins and you don't want to bother about operating the spin icon at every round, then the autoplay feature is for you. On that same screen where you set your bet amount, below it, you will find where you can activate autoplay by specifying the number of spins you want to run and your spin limit. The maximum number of auto spins allowed in this game is 100.

An extra feature makes a slot more enjoyable and also adds to the winning potential of a slot. This explains why most slot players don't joke with it. Gladly, the Annihilator is one slot that's not bereft of extra features in any way. It comes fully packed with 3 main features; In command feature, set the world on fire feature, and the fun palace feature. The set the world on fire feature gets triggered when you land 3 scatter symbols. Here you will find the expanded wild setting the reels on fire, hence giving you a higher chance of winning a bigger payout. The fun palace on the other hand is triggered when you land 3 or more bonus symbols. This feature when activated presents you the opportunity to pick doll symbols, which have hidden prizes. In a case where the scatter symbol is found in the course of picking doll symbols, the set the world on fire feature will also be activated. The In Command feature exposes you to expanding wilds and respins when you don't win. To get more information about the specific payout values of the other symbols featured in this game, check the paytable.

Rock on with this super-amazing slot with absolutely breathtaking graphics, superb soundtracks, exhilarating extra features, and mouthwatering maximum winning potential of over 5000xyour bet. Casino lovers in South Africa will definitely enjoy this one.
My rating