How to play poker 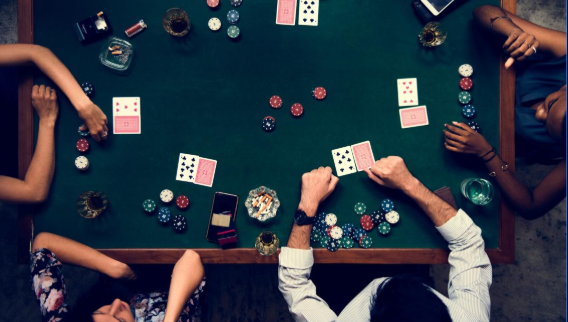 Poker is one of the best known and best loved card games out there. It’s a tense game that balances skill with luck… and it requires nerves of steel; staring down the other players, hoping you don’t have a tell, knowing when to bluff, or call someone else’s bluff. When you’re seated across a table from other players, poker is all about psychology.

But what about online poker? What happens when you remove the psychological element, and bring the game down to pure, clean, calculated odds? This brings a whole new dimension to poker game play… and it’s one we enjoy.

A little bit about the game

Poker is among the oldest card games still played regularly today. Its earliest known form was a German game called ‘pochen’, as far back as the 1500s. Over the next three hundred years, poker would migrate across the ocean to New Orleans, where it would evolve into the basics of the game that is so widely loved today.

The poker we play nowadays comes in various forms, with regional variations, house rules and even venue-specific rules. And it has seriously taken root as one of the most widely enjoyed games in an online environment. Online poker comes in hundreds of varieties, with different draws, wild cards, bonuses and more.

How to play poker – the basics

Though there are hundreds of small variations in poker games worldwide, a newcomer to the game should get acquainted with certain universal basics.

Traditionally, you play with one deck of 52 cards, which may include one or both jokers. Each player is dealt five cards, either all face-down (draw poker) or with one or more cards facing upwards (stud poker). Players can then exchange one or several of their cards for new cards, if they want.

Before you put your chips down, it’s critical to understand how cards are scored in poker, whether you are playing the live dealer game, or video poker. The types of hands you can get, scoring from highest to lowest, are:

If two or more players have a similar hand, the highest score goes to whoever has the highest ranking cards. For example, you and an opponent reveal that you both have four of a kind; your opponent has four 8s, and you have... four kings. You win (unless another opponent, who’s been very quiet throughout the betting, suddenly throws down a straight flush, crushing you both with a satisfied smile. Ouch.)

If you’re a newcomer to poker, playing online might appeal to you as a comfortable way of getting your head around how it works before you step up to a big game. If you’re a seasoned player, enjoy getting high doses of your favourite game from the convenience of home, and discover the ever-growing variations available at PlayLive.

Our video poker games include In Between and High Hand Hold’em from OneTouch, and Play’n Go’s Casino Hold’em and Casino Stud, which means you have pretty much everything you need to keep you busy. If you’re more of a live dealer enthusiast, you’ll love what Evolution Gaming has done with the place, with Triple Card, Extreme Texas Hold’em, Casino Hold’em, Two Hand Casino Hold’em and Caribbean Stud among the stalwarts at the table. Take a seat, join in the chat and have fun with the live dealer while you pull out your best poker strategies. We even have a handful of poker-based slots from Wazdan, including Caribbean Beach and Joker Poker.

Choosing whether to play video or live dealer poker depends on the kind of experience you crave. With live poker, you pit your wits against either just the dealer or against dealer and other players, much like at a land-based casino, and your job is to make sure your hand beats everyone else’s or at least hope they fold before you.

With video poker, it’s just you and the game. Your hand is scored by its ranking, with royal flush having the highest possible score. The lowest hand that can earn you a win varies from one game to the next. Some set three of a kind as the minimum winning hand, for example, while others start at a straight, or even a flush – so stakes are high from the get go.

In the absence of psychological tricks poker players can engage in while playing in person, online poker comes down to your ability to calculate the odds.

Of course, ballsy betting – betting considerable amounts with little or no hesitation – is a psychological tactic that can intimidate certain opponents and doesn’t require your poker face, but it’s high risk.

If you’re playing stud poker – most likely at PlayLive – you’ll be able to see one or more of each player’s cards, which means you can make more educated guesses about their hands. However, in either online or in-person games, taking too long to place your bet can be a real dampener on your game. You need to be able to quickly evaluate your opponent’s odds compared to yours, and make a choice. This kind of on-the-fly odds calculation is exactly what makes online poker so exciting.

Newcomer and veteran alike will find something to delight you in our range of video and live dealer poker games, so come on in and place your bets, folks and see if the odds are in your favour today.
Back to News